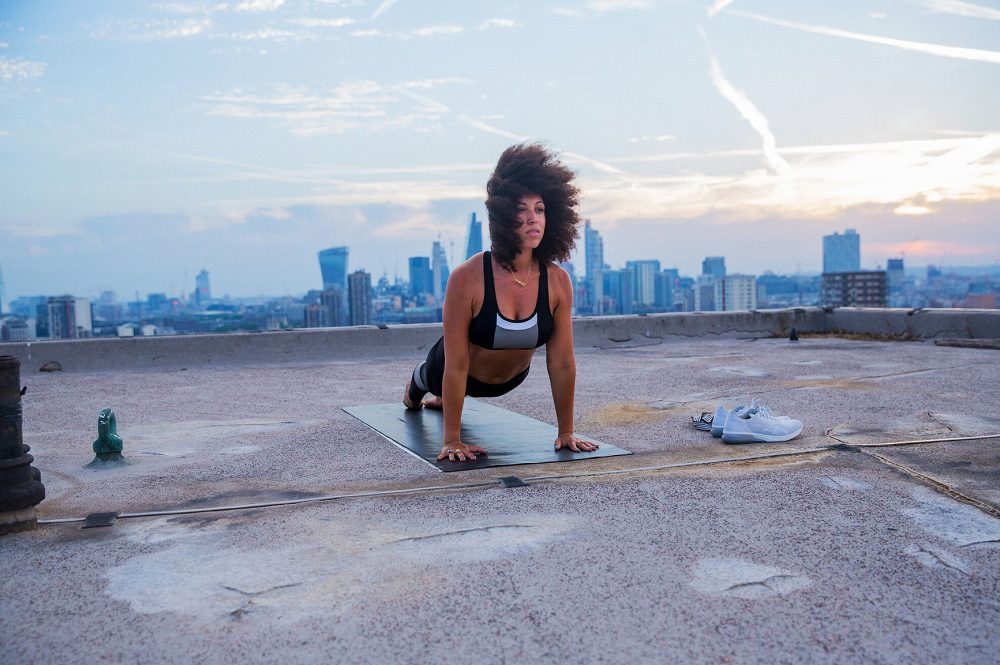 Our women in fitness series is a celebration of fly girls doing fly things. Meet Sanchia – a runner-turned-yoga teacher who’s currently taking the London scene by storm with her much-loved Yogahood and GyalFlex classes.

It just sort of happened to me. I was a normal person at the time who was neither fit or unhealthy, just … meh, you know. I would sporadically dip in and out of fitness related activities (swim, spin, yoga, some legs bums and tums vibes, etc).

But I always had this image of my future self and what that Sanchia would be and look like. I was jealous of the runners in my hood, looking all purposeful, fit and driven. Years before I could run, I tried running around my local green space. I thought it would be much easier than it was.

Running was just fast walking, right? I set myself a goal of running five laps around Russell Square Gardens and failed. I felt so crap about myself as my vision of bussin’ laps around the park, getting that runner’s glow on and feeling all smug faded hard (like the sound of my heavy feet on the concrete) ‘cos all I could do was two laps without feeling like my chest was a bunsen burner. I remember promising to never ever try that shit again. I was so pissed about it, that I convinced myself that my body wasn’t built for running. I had never felt pain in my chest like it. After much persuasion from two good friends I fell into Spartanfam, a community based fitness session focussed on bodyweight exercise. I also joined Run Dem Crew, an urban running crew and more importantly family, that ran the streets at night and celebrated their people. I guess the key thing here is that I like the kind of communities and people that don’t laugh at your dreams. We just happen to do stuff with our bodies too. I’ve not looked back since. As my Pops would say “You see it deh?”.  The power of the mind will have you making up a whole heap of bullfrog. I’m saying this as I sit upon a throne of 10k, half and full marathon medals.

Find the thing that lights a fiyah deep down inna ya belly. It should make you smile, feel good, smug, strong, proud, whatever! There will be ups and downs. Simple.

Don't beat yourself up, ever. If I saw this "fitness/healthy lifestyle" ting as a destination I would have given up long time ago. It's always a journey. Enjoy and go get your life. You deserve nothing but the best!

Music to move to: listen to Sanchia’s five dope tracks

Find out more about Sanchia’s monthly event Gyal Flex and her Yogahood classes on www.sanchialegister.com