Women in fitness: Leeanne, Personal Assistant and Captain of Backpackers 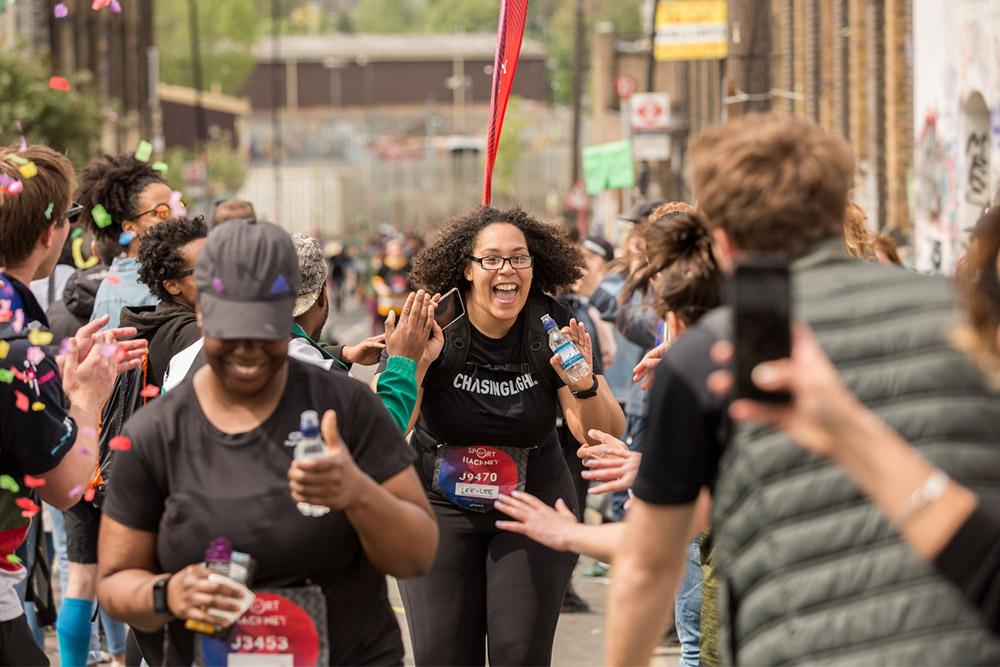 Our women in fitness series is a celebration of fly girls doing fly things. Meet Leeanne – she’s captain of Backpackers, a running crew in London that believes it takes heart – rather than speed – to go the distance.

I started running in 2012, to lose weight. Being 6ft tall and over 18stone meant I had quite a bit of work to do. I had signed up for a Race for Life to motivate myself and found that I really enjoyed training and seeing the progress I was making. Each run got easier or a bit quicker. I was doing something I’d not really done before but I was loving it. Once the run was done I ended up finding Run Dem Crew West, a spin-off from Run Dem Crew. Each week we’d set off from Paddington Rec and pound the streets of West London. The only problem was, I was slow; always at the back and always seeming to hold everyone up. People said not to worry but I’d feel all eyes on me as I rolled in last, pushing myself past my limits to try and keep up. I soon ended up in the original Run Dem Crew and found my place in their slower pace groups, tortoises and hares.

I loved leading the groups and encouraging new members to find their feet. I watched so many of them graduate upwards around me. Around the same time I ended up with a London Marathon place. I trained my butt off and ran the damn thing in 5 hours and 37 minutes – a respectable time, so I thought. I remember being at a restaurant table with some well-known fitness people and one person talking about the people who came in after five hours who clearly hadn’t trained properly or put in the effort. I was fuming but didn’t say anything. I was out in  the snow, hail and rain. 6am runs. 20 mile runs. I trained harder than I ever had before and her words cut deep. I wasn’t fast, I’d never be good enough.

The birth of Backpackers

After London 2013, I actually stopped running for two years. I was fatigued and tired of coming last. I put back on  the weight I lost and struggled to stay fit and strong. In 2015 with my wedding coming up and four stone to lose I made my way back to Run Dem Crew.  It was like I’d never left. I was welcomed with open arms; I was home. I settled right back into the new “party pace” group. We’d run our butts off but with music and probably a bit too much laughter. In 2016 I was asked by my longtime friend Chevy Rough to help him with a new group he was setting up. It was a group for runners like me, who trained hard and ran harder but were always at the back. I jumped at the chance. I knew the difference having a supportive running family around you makes. I knew there were people too afraid to join other crews for fear of being too slow. Backpackers was born. We launched in February 2017 and have just celebrated our first birthday. My vision and goal is to ensure everyone knows just how awesome they are no matter what their speed is. Each week I get to push and inspire people who are constantly told they’re not good enough because they’re not fast. Each week we have people who have decided they don’t want to be made to feel inferior because of their perceived lack of speed. We don’t wear watches or time our runs – we just get out there and do it. I found out I was pregnant in April 2017 when I was training for my second London Marathon. I decided not to run it. But I did end up pacing the back of the Hackney Half Marathon. We have a great relationship with Virgin Sport and have Backpackers pacing the rear of all their races. No runner is left behind. We’ve gained so many new members this way. It just shows the value of having that support when you’re running. I carried on running for about five months into my pregnancy but then it had to take a back seat whilst I grew the tiny human. Now the tiny human is here I’m on a whole other journey to slowly regain my fitness and get back into running. Emergency surgery means I have to start very slowly. It’s ok. I’m used to it. But I will get back to running hopefully by the end of spring. I miss the roads and I’m pretty sure they miss me. This year I really can’t wait for Backpackers to grow bigger and stronger and to show our collective voice. We might be at the back but it doesn’t make us any less winners.

This year, I’ll continue to lead the Backpackers and work on my own journey back to fitness. I’m hoping to really encourage new mums into running through Backpackers and generally just continue to be awesome. You can find details of our Thursday runs on Facebook and Instagram: @backpackersclc.

My mantra when I run is always, "It wasn't fast but it was done". When you are a more casual runner in terms of speed, it's very easy to get disheartened but always remember a mile is still a mile no matter how long it takes you. You worked so hard to get where you are and your miles still count and still matter.

LeeannePA and captain of Backpackers