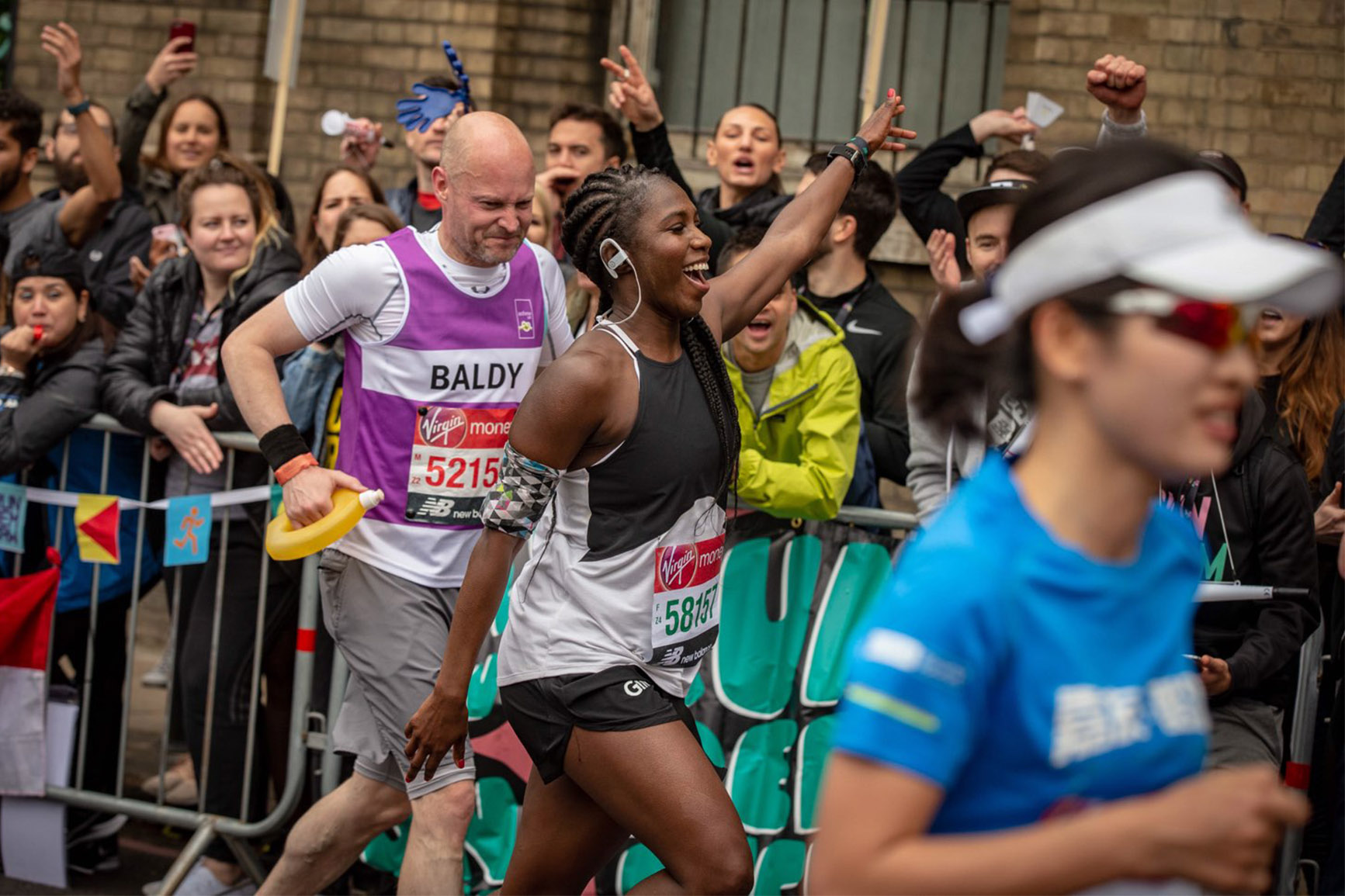 A few years ago, you couldn’t have paid this black woman to do a marathon. Or sponsored me. Or convinced me that doing one might actually inspire a whole heap of women who, like me, just didn’t believe they had what it takes. Maybe I would’ve thought differently if I noticed more melanin taking part. Every year, I’d  rock up to cheer at London Marathon, keeping my eyes firmly peeled to catch sight of a Tolu, Ebony or Shantay. Of course, the few black women that stood out were usually the pros or Kenyan (or both) – and ironically, they were getting paid.

But aside from that, there was also my mom, bless her, who never took too kindly to me running anyway. Championing things that only make money or sense, there was absolutely nothing lucrative or logical about running 26.2 miles –  on the day of the Lord at that. So basically, it wasn’t gonna happen.

Yet ever since I started long distance running in 2011, I’ve run not one, but four marathons. One took me to Tokyo, while another – an ultra marathon, can you imagine? – saw me traipse along The Ridgeway (Britain’s oldest trail path) for nearly eight hours with my home girl and fellow fly girl Sanchia, eating all the cakes and sarnies, and at one point, pretending we were filming an episode of MTV Cribs (true story).

Still, it was my debut at London Marathon this year that’s been the real game changer, for a few reasons. I trained RIDICULOUSLY hard for starters, signing up for professional coaching, taking up strength and conditioning classes, cleaning up my diet and making better food choices. I got my place via New Balance, the race sponsor, which also meant I couldn’t hide. For me, this extra layer of accountability meant failure wasn’t really an option.

Mind you, that’s often the case of doing life as a black woman. Since childhood, we’ve often been taught that to succeed in this world, we have to work twice as hard, and even then, that may not be enough. In those moments when it’s not, we’re left with two options – to stop trying, or continue with more vigour until something gives (which is usually ourselves –  specifically, our mental health and physical wellbeing).

But I’m pleased to say that didn’t happen. I trained and ran London Marathon 2019, earned a new PB and shaved 17 minutes off my previous time to finish in a rather pleasing 4 hours (on the dot). I’d go so far as to say I enjoyed it, learning these lessons before, during and after the race:

Like I said, black women achievers are known for their zealous commitment to the graft – but as I soon discovered, my running coaches were no taskmasters. In fact, they taught me to slow my ass right down to be more mindful when running, kinder to myself and less pre-occupied with my running watch or anything that might hinder appreciating the simple joy of movement.

If I could hazard a guess –  and you’re a black woman reading this – you might have been one of those girls who were proud sprinters back in the school days. But, guess what? Long distance running doesn’t need that same hype and energy. The clue is in the name: it really is about the long game. You gotta take time with it, but it does pay off.

2. The support system is everything

If I didn’t have the backing of friends, family and Fly Girl Collective during those training months, I doubt I would’ve done as well as I did. I’m a firm believer that there’s strength and power in numbers – and in this case, that came with the sense of feeling someone always had my back, during the highs and lows of my training.

Gone are the days of winging it (and real talk, you can’t blag a marathon; it will show you who you are, one time). I always followed some sort of  training plan in the past, but wouldn’t fully commit to really see it bear fruit. But I now know a good training plan will challenge you, but in the best way, because everything I experienced over the four months of training gave me exactly what I needed to run a great race.

4. I’m glad I didn’t braid my hair too close to race day

You know when the canerow is tight, tight? Thankfully, I had a few days before the race for the tension to calm down. Otherwise, that could’ve been a problem… #justsaying

I can reel off plenty of reasons to put anyone off running a marathon (or anything else for that matter). But the biggest blocker usually comes down to comparing ourselves to other people. Newsflash: there will always be someone out there that’s better than me at this running malarkey – and that’s totally okay.

When I’ve tried to keep up with the Joneses in the past, I’d end up frustrated and injured, pushing myself harder than necessary to get results fast (doesn’t work).  But I’ve come to realise that truly accepting myself is about appreciating where I’m at and acknowledging my potential to be better, because I will get better. That’s just how fly girls roll.

Matilda Egere-Cooper is the founder of Fly Girl Collective. She ran London Marathon 2019 as part of New Balance’s ‘120 Days’ campaign, which aimed to support runners in the weeks of training leading up to race day.